GOD is real and exist. 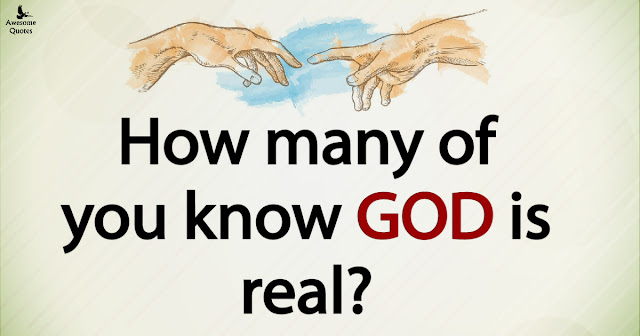 God is real. God is in me and in my life. I've been blessed, and he continues to bless me, and that is one thing that I will always know for sure. Naturi Naughton

If God is real, and I believe he is, then he is outside of nature. He is, therefore, not limited by the laws of nature in the way that we are. Francis Collins

The further the spiritual evolution of mankind advances, the more certain it seems to me that the path to genuine religiosity does not lie through the fear of life, and the fear of death, and blind faith, but through striving after rational knowledge. Albert Einstein

God is real. God is here now. God is this moment revealed. For the most part, we are lost in the past and future world of the mind. To experience the living Presence of God in all things present, we will have come to where God is. We will have to become fully present. Otherwise we have no choice but to believe in God or disbelieve in God and neither is true, for the truth is beyond belief! Leonard Jacobson

If God is real, why does he align perfectly with our views? We should expect God to challenge us on what we think is right somewhere .Timothy Keller

“For God to prove himself on demand, physically, would be a grave disappointment, and the strongest Christians should be considerably grateful that he chooses not to do so. The skeptic endlessly demands proof, yet God refuses to insult the true intelligence of man, the '6th sense', the chief quality, the acumen which distinguishes man from the rest of creation, faith.”― Criss Jami

“It was necessary for man's salvation that there should be a knowledge revealed by God besides philosophical science built up by human reason ... because man is directed to God as to an end that surpasses the grasp of his reason: "The eye has not seen, O God...what things Thou hast prepared for them that wait for Thee" (Is 66:4). But the end must first be known by men who are to direct their ... actions to the end. Hence it was necessary for the salvation of man that certain truths about God which exceed human reason should be made known to him by divine revelation. Even as regards those truths about God which human reason could have discovered, it was necessary that man should be taught by a divine revelation; because the truth about God such as reason could discover would only be known by a few, and that after a long time, and with the admixture of many errors. Whereas man's whole salvation, which is in God, depends upon the knowledge of this truth. Therefore, in order that the salvation of men might be brought about more fitly and more surely, it was necessary that they should be taught divine truths by divine revelation.”― Thomas Aquinas

“He had been searching for it his entire life. He had devoted himself to poetry to find it. Now, in the middle of his life, he found it. It was in the face of the love of his life, his daughter. She who had never blushed before, now blushed. And in that blushing, he knew, was the existence of God. That was the day her father learned what God was. God was pure beauty, God was his daughter’s face when she blushed.”― Roman Payne