TAKE A LOOK AT YOUR HANDS – IS YOUR RING FINGER LONGER THAN YOUR INDEX FINGER? 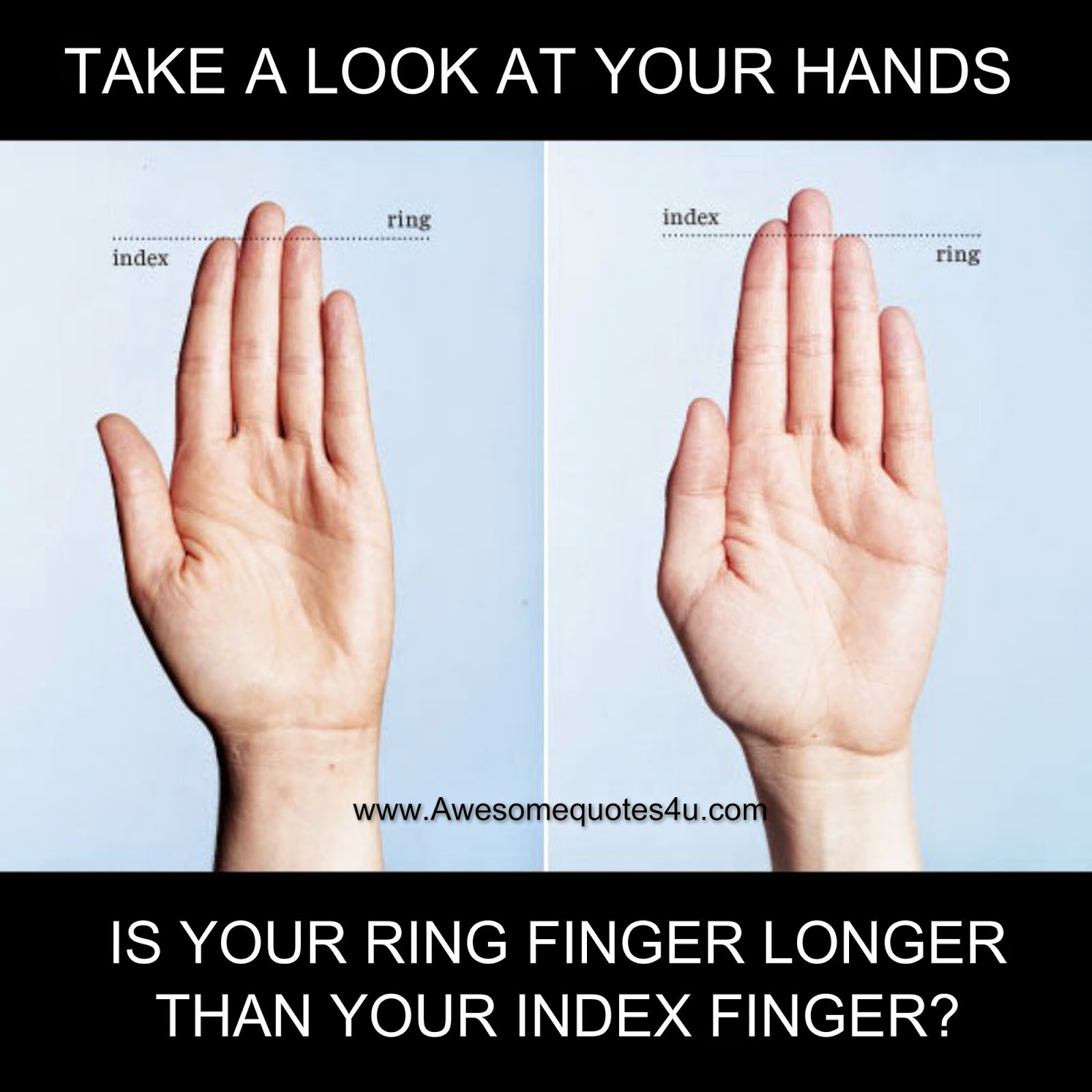 Success isn’t written in the stars, it’s in the length of your fingers. 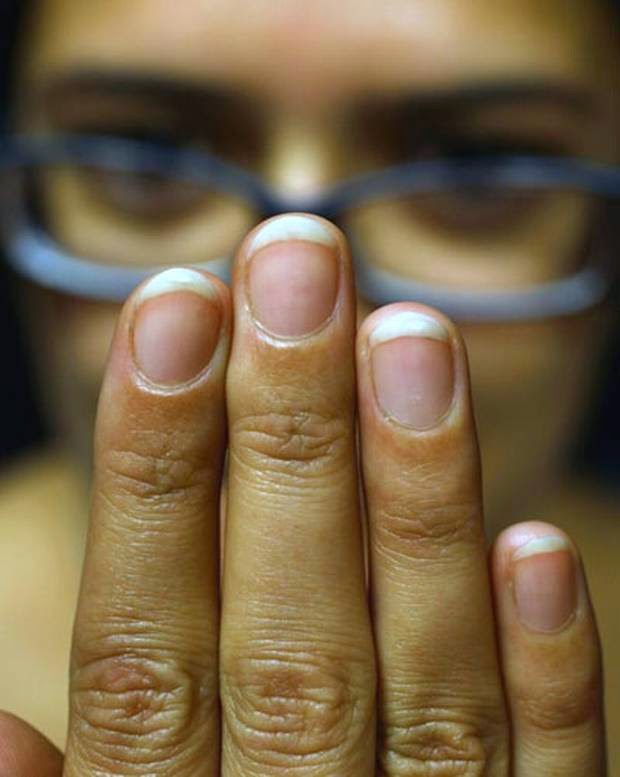 Take a look at your hands – you will learn a lot about yourself, Cambridge University scientists say

It is the simplest hands-on experiment – and, for once, it is safe to try this at home. Compare the length of your fingers and predict your own future.

Everything from sporting prowess to academic ability, sexual orientation to susceptibility to disease can be assessed on the twin measurements of the length of the ring and index fingers. It is science’s answer to palmistry.

Researchers at Cambridge University have found that finger length can point to success in the City. Traders with longer ring fingers made the most money – up to six times more than those whose ring fingers were relatively short.

The ratio between index and ring finger is believed to be linked to exposure to the male hormone testosterone in the womb. On average, men tend to have longer ring fingers and women longer index fingers. The higher the testosterone, the greater the length of the ring finger and the more “masculine” the resulting child – whether male or female. The longest ring finger is known as the “Casanova pattern”.

HOW TO FIND RATIO BETWEEN INDEX AND RING FINGER? 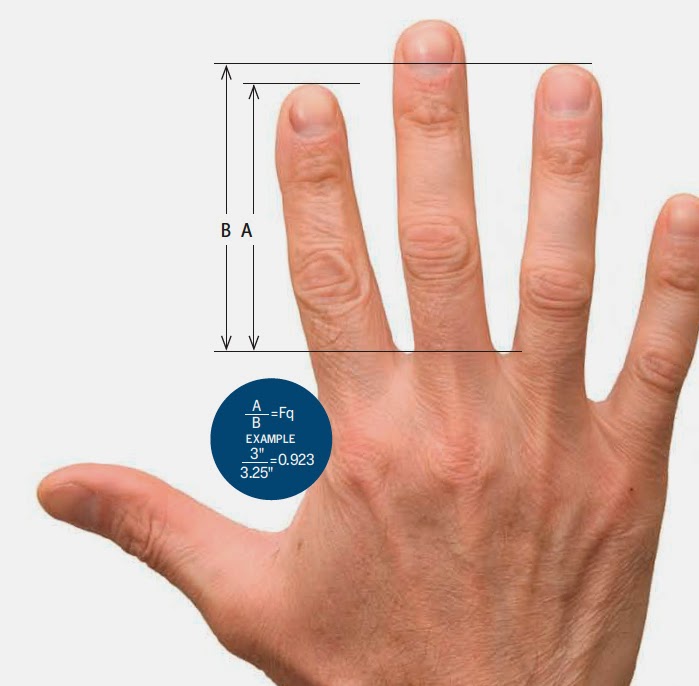 HOW DO YOU MEASURE UP?

The shorter your index finger, the sharper your tongue: In both men and women, a lower Fq can predict more verbal sparring.

A greater surge of prenatal testosterone can be an indicator of high levels of achievement in sports, as well as a mental toughness in athletics. In one study, college varsity athletes (male and female) were found to have shorter index fingers than other students.

In women, a more masculine digit ratio tends to predict a better sense of direction, backing up past research that found men tend to have better spatial cognition than women.

More risk taking Fq < 1
Men who experience a higher surge of prenatal testosterone, and thus have longer ring fingers, tend to be risk takers. One example: The most successful financial traders tend to have the longest fourth fingers. These behavior patterns seem to apply only to men.

An index finger that’s shorter than the ring finger can be a sign of knee osteoarthritis risk, particularly in women, compared with people whose fingers are equal lengths, or who have a longer index finger.

Increased risk of oral cancer* Fq > 1
A high digit ratio — those with very little difference between the index and ring finger, or with a longer index finger — was found among men with oral cancer, compared with men with pre-cancerous oral lesions or no lesions, according to one all-male study.
Lower prostate cancer risk Fq > 1

Men with long index fingers and shorter ring fingers have a 33 percent reduced risk of prostate cancer. If they’re younger than 60, the risk is even less — 87 percent.

Ring finger longer than index finger
More often found in men than women, people with longer ring fingers tend to excel on the sports field, especially in running and football.
Scientists at the University of Bath found that children who had longer ring fingers are better with numbers-based subjects such as maths and physics, which are traditionally male favourites. A study this week showed autism may be linked with exposure to testosterone in the womb. Autism is sometimes described as the “extreme male brain” and is four times more common in boys than girls. Finger length might provide an early warning of the condition. Canadian researchers from the University of Alberta have found a correlation between length of the ring finger and levels of physical aggression – as would be expected in the most masculinised individuals.
Index finger longer than ring finger
The traditional pattern in women, long index fingers can predict a child’s academic strengths. Scientists at the University of Bath found that longer index fingers indicated good verbal and literacy skills, where girls dominate. The findings were published in the British Journal of Psychology in 2007. Studies of sexual orientation have shown that lesbian women are more likely to have longer ring fingers, suggesting exposure to higher levels of foetal testosterone. Professor John Manning said research he had conducted suggested that gay men were more likely to display feminised finger ratios, suggesting less testosterone exposure in the womb.
However, sceptics have observed that twin studies show that 70 per cent of the difference in finger length is inherited from our parents. 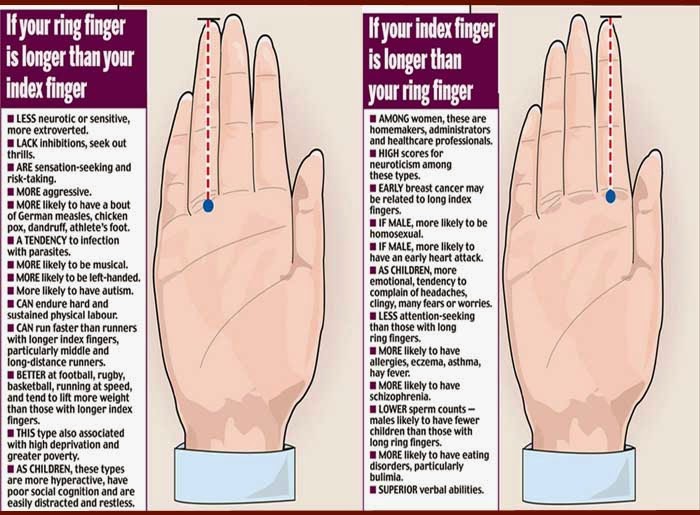