Top Ten Drugs That Cause Kidney Damage: Please Do Not Ignore This

Your kidneys can often suffer damage if you are using drugs often such as antibiotics, analgesics, etc. The following list contains the most dangerous drugs that can be a threat to the health of your kidneys: 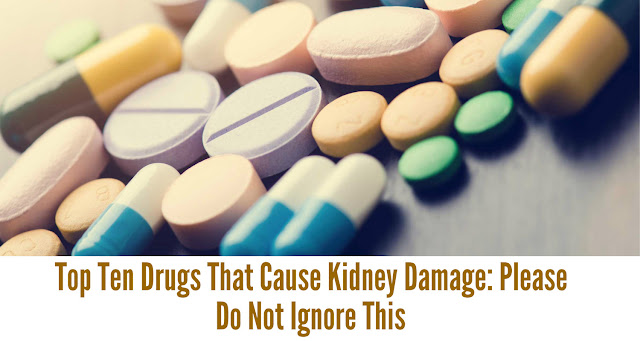 1 .Antibiotics including ciprofloxacin, vancomycin, methicillin, sulfonamides.
2 .Analgesics such as acetaminophen and also non-steroidal anti-inflammatory drugs: ibuprofen, aspirin, naproxen and so on.
3. Antiviral drugs: indinavir and tenofovir which are used to treat HIV, and acyclovir that is used to treat herpes infections.
4. Anticonvulsants such as trimethadione which is used to treat seizures, and phenytoin (also known as Dilantin).
5. COX-2 inhibitors: celecoxib, rofecoxib and valdexocib (the last two have been withdrawn due to cardiovascular toxicity). These drugs are classified as safe for the stomach, however they are just as dangerous to the kidneys as other NSAIDs.
6. Drugs used during chemotherapy: quinine, interferons, cisplatin, pamidronate, carboplatin, tacrolimus, cyclosporine, mitomycin C, bevacizuma; drugs used to treat thyroid problems: propylthiouracil.
7. Drugs used for the treatment of high blood pressure: captopril
8. Drugs that treat heartburn: pantoprazole, omeprazole, esomeprazole, lansoprazole, and rabeprazole.
9. Lithium which is used to treat bipolar disorders.
10. Drugs that treat arthritis: infliximab, and also the drugs used in the treatment of malaria, rheumatoid arthritis, and systemic lupus erythematosus : hydroxychloroquine and chloroquine.