6 Well-Known Symbols Whose Meaning We Knew Nothing About.

We surround us daily with thousands of famous symbols without thinking about their origin. Some are well recognizable, others more anonymous. Commonly they have a thought, message they want to convey, perhaps a hazard. A great thing with symbols is that they are made to be as simple to understand as possible. Most often, regardless of language, culture and ethnic background. 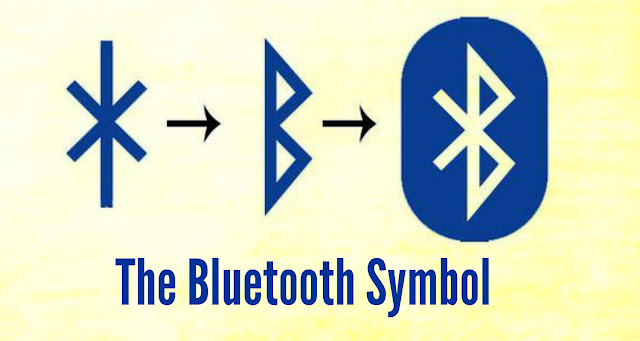 The Bluetooth symbol is a bind-rune, which means that it is formed from two runes that are merged together. Runes are the ancient Norse letters that, according to mythology, Odin discovered and gave to gods and humans. Runes have been used for over thousand years (probably a lot longer). They were letters (used to spell things) and symbols (each symbol stood for a specific word or concept).
During the rule of King Harald Blåtand, a historical figure famous for uniting Danish tribes into a single kingdom. Harald was often called “Bluetooth“. But why? Well, Harald was known for his love of blueberries, which left one of his teeth with a permanent blue tint.

Bluetooth technology was designed to unite multiple devices to a single network. The symbol representing this technology is a combination of Scandinavian runes: ”Hagall“ (or “Hagalaz”) which is the analogue of the Latin ”H,“ and ”Bjarkan“ — a rune that equals the Latin letter “B.” These two runes form the initials of Harald Blåtand’s name.

The “power“ (or ”power on”) symbol can be found on practically any device, but few people know about its origins.
As far as the early 1940s, engineers used a binary system for representing specific switches. 1 meant on and 0 meant off. In the following decades, it transformed into a circle with a vertical line running through.

The peace symbol was invented in 1956, during the protests against nuclear weapons. The symbol was a combination of the semaphore signals for the letters “N” and “D”, meaning Nuclear Disarmament.

We all associate the love heart with romantic love and affection, and whilst it is not confirmed, a theory suggests that its shape actually derives from silphium, a giant fennel, which was used as birth control by the ancient Greeks and Romans.

It has come to represent the atrocities of the Nazis in World War II, but its actual origins date back millennia. Deriving from the Sanskrit ‘svastika’, meaning good fortune’ or ‘well-being’, it is believed first to have been used in Neolithic Eurasia to represent the movement of the sun through the sky. Even today a similar hooked cross is a sacred symbol in Hinduism, Buddhism, Jainism and Odinism and is commonly found on temples or houses in India or Indonesia.

The ampersand symbol, which we use for the symbol of “and” actually has a similar meaning. It represents the Latin conjunction “et“ which equals the English word ”and.“ Such ligature was first invented in Ancient Rome by Tiro, Cicero’s personal secretary.

To speed up writing, Tiro invented (&) which became known as the “Tironian Notes.” The actual word ”ampersand“ is a contraction of the phrase ”And per se and”. I bet you didn’t know that! Source