6 Signs You're In The Wrong Relationship 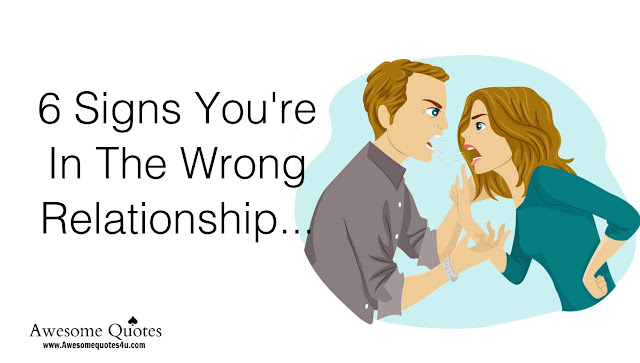 Relationships can get messy. And that's only because we're capable of feeling intense emotions rapidly, sometimes so fast that we forget to take a step back every now and then to really think about what's going on.

Sometimes those intense initial feelings you have for one another can keep your relationship happy for a short time, but eventually there has to be something else that takes its place.

Otherwise, you're likely to succumb to the boredom, fear, anger and frustrations of an unhappy relationship. Here are six signs you're in the wrong relationship and need to move on:

You're starting to resent them

Falling out of love with your partner can happen, but when you start to have feelings of hate or contempt for them, it's a sign that things are about to get bad. Don't let yourself become bitter and fearful.


You blame each other for everything

You think that everything wrong with the relationship is their fault, while they think the same about you. Of course, you both know that neither person is 100 percent to blame. But you're not about to let the other person know that. Time to move on.

You're entirely different from each other


If you like to be outside in the mountains all day, but your partner won't get off the couch for more than five minutes, certain needs and desires will eventually feel unfulfilled if both partners are not okay with the other's lifestyle.

Maybe the two of you met and had an instant connection, but as time went on you started to realize that you don't actually have much in common. These differences can be a dealbreaker.


You're not being yourself

If you've noticed that you've lost a lot of what it meant to be you, you might want to step back and re-evaluate things. If we're not growing and changing for the better when we're with someone, or are actually getting worse, then it's a sign that things are not right. Your partner should bring out the best version of yourself.


You fantasize about being with other people

While you might not be physically cheating on your partner, fantasizing about a life that doesn't include them is a form of emotional cheating. Daydreams and visions of a better life with someone else, even if they're not real, is telling that you're currently unsatisfied.


You're not really trying


A great way to tell if you really want to be in a relationship is whether or not you care. If you're feeling more and more apathetic as the relationship moves forward, there really is no point in throwing time, money and effort at it, is there?

If you're bored with a relationship and can't find a reason to care, it's a sign to move on without each other. Apathy is the opposite of love.