Trying to Quit Smoking? Here’s What happens To Your Body When you Stop 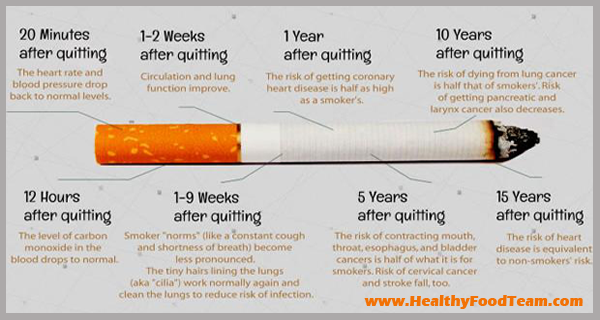 Has the world entranced your mind into needing cigarettes? Has the overwhelming stress of every day life gotten too much? It’s not your fault you smoke cigarettes, they have been designed to keep you on them.
When they were first being introduced, doctors would recommend men smoke them because it’s was good for their stamina; it made them stronger. Smoking was allowed everywhere – even on planes.
Today we have woken up to the truth about what we are doing to our bodies. If you are a long time smoker, quitting on the spot can be literally impossible. LITERALLY. The chemicals in your brain have shifted into making you feel like you cannot live without one. My amazingly brave partner just quit smoking a pack a day for the last 20 years. He knew his body had reached a limit and it became very dire that he stop immediately. It does come down to a choice, but you don’t have to do it alone.
This is what happens to your body after you stop smoking:

20 TO 30 MINUTES
Twenty minutes to half an hour after you give up smoking for good, your blood pressure will fall and your pulse will drop.And your hands and feet will start to warm up as circulation improves.

8 HOURS
Eight hours into quitting, carbon monoxide is eliminated from the body, therefore allowing the lungs to clear of mucus as oxygen levels increase.

48 HOURS
Two days in and an ex-smoker’s sense of taste and smell will improve. Chance of heart attack also decreases.

72 HOURS
Three days down and it benefits should become more obvious. The bronchial tubes in the lungs begin to relax, making breathing easier. Your circulation improves. Walking becomes easier.

2 TO 3 MONTHS
If you have managed to last two months, the good news is that circulation and lung function will improve, as well as your stamina. Coughing, sinus congestion, fatigue and shortness of breath decrease. Lungs are clearer and more resistant to infection. The risk of coronary heart disease is reduced to half that of a person still smoking.

9 MONTHS
The lungs will continue to improve their function, clearing mucus more effectively, and keeping clean therefore reducing the risk of infection. Overall, an ex-smoker will notice their energy levels improve.

1 YEAR
A year after a smoker quits and the serious benefits begin to kick in. Twelve months after resigning yourself to a life without nicotine, and the risk of heart disease reduces to half that of a smoker.