10 KEYBOARD SHORTCUTS YOU MUST KNOW. 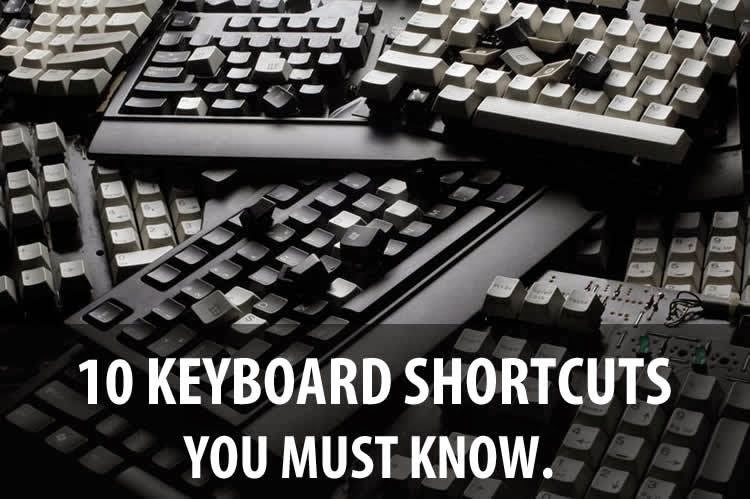 Tired of dragging the mouse every time you want to perform even the most basic tasks on the computer? Here’s help. Did you know, for example, that you don’t need the mouse to select text, switch between programmes, or open and close browser windows?

Microsoft Windows, Word, PowerPoint and Excel have a number of hidden keyboard shortcuts that will make using the computer easier and faster. Here are 10 such useful shortcuts that you must know…

Done watching a YouTube video or reading an article on browsers like Google Chrome, Mozilla Firefox etc and want to close tabs, or the whole window? To close a single tab in these web browsers, hit Ctrl + W; whereas Ctrl + Shift + W will close the whole window.

Accidentally closed a tab you were viewing on web browsers? You can reopen such tabs by Ctrl + Shift + T if the window is still open. To open new tabs, just click Ctrl + T.

Increasing & decreasing the font in Word

Preparing a project on Microsoft Word and need to change the font size many times? Instead of using the mouse every time for increasing the font of any text, you can just select it and click Ctrl + ]. Similarly, Ctrl + [ decreases the font size of the selected text.

We often find ourselves switching between windows while working and using the mouse every time can be tedious. You can toggle between windows in all versions of Windows using Alt + Tab keys, making the task easier when you work.

While working, you will often use the internet for research, but switching between the web browser and document is not always convenient. Instead, you can put the two windows side by side and work easily.

You can delete files just by selecting them and hitting the Del key. But such documents are just deleted from the folder, not the computer; they are still in the Recycle Bin. If you want to delete a document in one go, just hit the Shift + Del combo.

Capturing screenshots depends only on the keyboard. Just hit the Print Screen button (pssssst… it is next to the Scroll Lock key) if you are using a desktop. Laptops have the Function (Fn) key, so use the Fn + Print Screen combo to take screenshots.

While making any project using Word, you will find yourself checking the word count every few minutes. Instead of going to the Tool menu and selecting Word Count option each time, you can simply select the text and hit Alt + T + W.

Another frequent MS Word task is changing text in all caps to upper/lower case. You don’t have to write the whole sentence again in such a case, just select the text and hit Alt + F4.

Going directly to desktop and locking the PC

The Windows key on the keyboard is not just to open the Start menu; it can help perform several tasks with ease. If you have opened several windows and want to go directly to the desktop, just hit Windows key + D. Hit it again to go back to the window you were using last. If you want to lock the computer, just hit Windows + L.

Selecting text in any Word document is quite common for all users and you probably hate dragging the mouse every time. If you want alternatives, then Windows has a few nifty tricks up its sleeve for you.

PowerPoint is another frequently used programme on Windows. If you have too many slides anddon’t want to scroll down to go to a particular slide, you can just hit the slide number and Enter key together, for eg 9 + Enter. Adding a new slide just needs the Crtl + M command and repeat the last action with F4.

Want to show your work to someone? Click F5 to start the presentation from the first slide or Shift + F5 to start it from the current slide. Want to increase or decrease font size? Just select the text and hit Ctrl + Shift + > or Ctrl + Shift + < combos, respectively.

Microsoft Excel has so too many tips and tricks to know in a go, so here are a few shortcuts you will find yourself using frequently.

Want to switch between Worksheets? Click Ctrl + Page Up to go left-to-right and Ctrl + Page Down to move right-to-left. Want to insert a new worksheet? Just hit Alt + Shift + F1.