How to Treat a Girl? 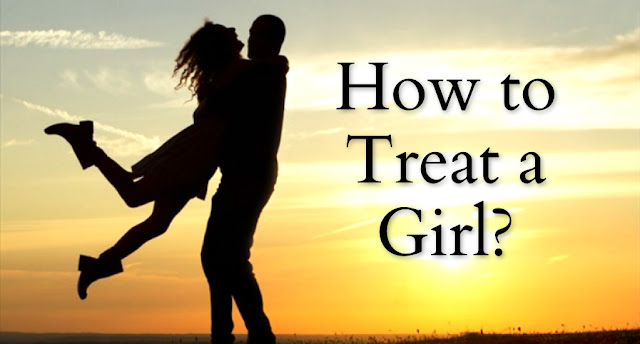 1. Whatever you do, don’t just show up at their house…they run around in their underwear just like we do.

2. Don’t cheat on them. It may seem foolproof, but girls tell each other everything about everything. Trust me, they WILL find out.

3. Beware of every single male relative and all guy friends. Any of them would kick your ass at the drop of a hat, and a lot of them wouldn’t even wait for the damn hat.

4. Never miss an opportunity to tell them they’re beautiful.

5. Don’t refuse to kiss in front of your friends. If they laugh at you, it’s because they’re jealous.

6. If they slap you hard, you deserved it.

7. Don’t be afraid to touch them if you want to. If they’re going out with you in the first place, it’s because they like being in your arms.

8. You can be dirty minded in private, really…most of them are not offended by it…

10. Most of them don’t mind paying half of everything, but they do discuss these things with their friends. Realize that if you make your girlfriend pay half all the time, everyone will know about it .

11. Do you honestly need all your money that much? Be a man, pay all the time!

12. Every girl should eventually get three things from her boyfriend- a stuffed animal, one of his sweatshirts, and a really pretty ring. Even if it’s not a serious relationship.

15. If you’re talking to a female friend of yours, pull your girlfriend closer.

16. Never, ever slap her, even if it’s just in a joking way. Even if she swats you first, and says, “Oh, you’re so dumb” or something, never make any gestures back.

17. You’re dead meat if you can’t get along with their pets, parents and best friends. Be prince charming to their friends, Mr. Polite to their parents, and make sure to be nice to their animals.

20. If you’re officially dating, and you’re introducing her to your friends, you’d better damn well introduce her as your girlfriend.

21. Don’t stress where you go for every date. They really only want to be with you.

22. If they complain that something hurts, rub it for them without being asked.

23. Girls are fragile. Even if you’re play fighting/wrestling, be very gentle.

24. Memorize their god damned birthdays. You forget her birthday and you’re basically screwed for life.

26. Don’t give her something stupid for her birthday or Christmas or Valentine’s day. It doesn’t have to be expensive, but it has to be meaningful.

27. If you think the relationship isn’t going to last, don’t wait to find out. It will only hurt you more if you draw it out.

28. After you’ve been dating for a while, realize that they really have started to trust you. Then you have a lot more responsibility, priviledge and control than you would think. Be careful with it.