7 Signs He Wants To Marry You

Have you been in a relationship for a while? Do you think its about time he proposed? Maybe you’ve been thinking about this for a while now, “does he want to marry me or not?” seems to be the question on your mind every single day! Well worry no more below is a very helpful list of signs that will better help you figure out this very important question: 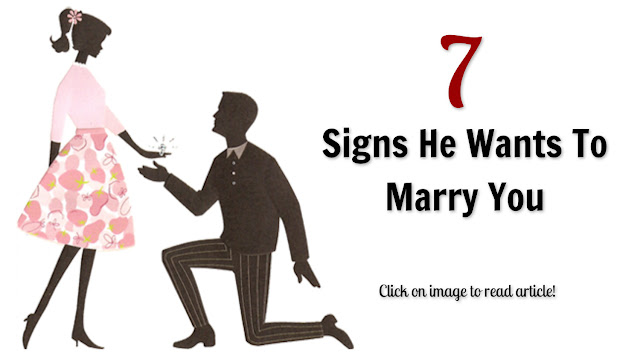 • Has he introduced you to his family

If a guy takes you home and introduces you to his family this is a very big step. Guys who take their girlfriend home are definitely serious about their relationship. If the family welcomes you in their social gathering no matter how big or small, these are all signs that your relationship is on the right path and he is serious about you.

• He doesn’t hide you

Sometimes in a relationship guys hide their girlfriend from the world, this is definitely not a good sign at all, but if the guy introduces you to his friends, family, colleagues and to the most important people in his life, this means that he honestly sees a future with you and is proud to show you off to the world


• If he says that your the only girl for him


If you are the center of the universe to your man and he treats you like you are his world and his one and only love than that means he wants to marry you. He only has eyes for you and you all his entire world.

• He Plans A Future With You

This is the most visible sign that he wants to marry you, if he plans a future with you or refers to something in the future keeping you in mind then obviously he is foreseeing a happy future with you. If he talks about buying a house together, opening bank accounts together, and how his kids will look like you then surely he is going to propose to you.

• Ifs Replaced by When

If your beau is starting his lines with, “When we get married,” instead of, “If we get married,” then he is considering you as his future partner and planning things for you together. He sees you as his wife in the future and wants to achieve his dreams with you. There are no doubts in his mind about you two getting married.

• No Scope Of Jealousy

Men sometimes get jealous when they find their beau talking to another guy, but when it comes to the guy who wants to marry you, he will not be jealous. He trusts you and has confidence that you won’t do anything to hurt him. His eyes say it all whenever he looks at you.

Tying the knot is just a formality if he is already acting like a loving husband. He cares for you, shows concern for your issues, gives you advice, treats you like his wife, and talks about having children together, are some signs that he is definitely going to marry you. He loves you with all his heart and already considers you his wife.

This site is made for the sole purpose of inspirations and motivations by Dr. Richardson Khristi and Suresh