Generally women lie about their physical characteristics like their mental state, weight and age etc. However, men don’t pay much heed to their physical attributes but lie for various other reasons. Most of their lies come across dealing with the opposite sex. 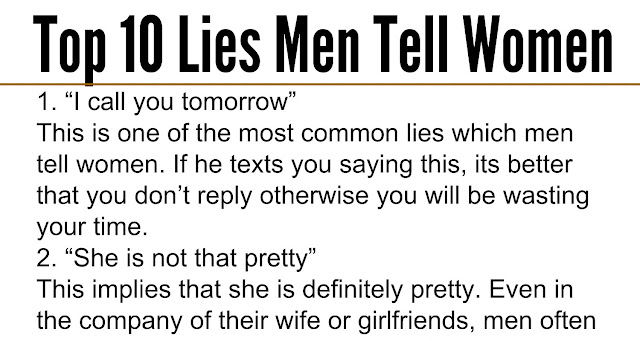 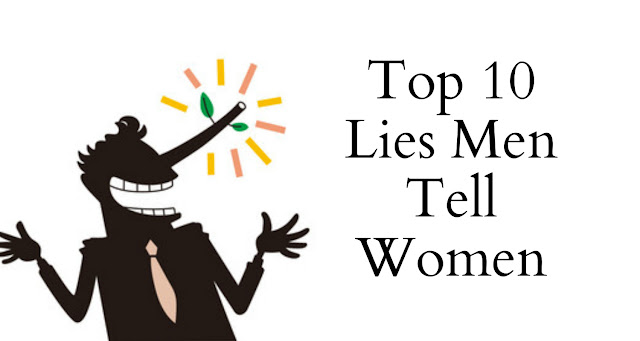 Here is what I would categorize as the top ten most frequently repeated lies that men tell to women.

This is one of the most common lies which men tell women. If he texts you saying this, its better that you don’t reply otherwise you will be wasting your time. Men generally say this just to avoid someone. In majority of the cases, you will see that the phone calls do not come not only for tomorrow but also for the subsequent days.
2. “She is not that pretty”
This implies that she is definitely pretty. Even in the company of their wife or girlfriends, men often ogle at other women and when their partners ask them, they just reply “she is not that pretty”. Well, majority of the women believe in their sweet talks but there are some smart ones who understands that they are not being given the due attention from their boyfriends or husband.

Irrespective of whether they are seeing someone, are married or single, men always tend to say that “I am single”. The logic behind it is really not difficult to understand. Saying this implies that you are open to a relationship. It’s always better to be available to everyone, every time.

This is mainly said to protect the male ego and also to avoid drama and confusion over some issues. If a man is saying this then he might not mean at all. However, just to keep things smooth and get going he is admitting that he is fine. Since ancient times, men are known for not showing their feelings.

He is definitely not stuck in the traffic if he is saying this. In some cases, it might be true but generally it’s not. This is just an excuse to come late to any occasion and show the women how busy they are.

Men fall in love with almost all the girls that they come across. This is the most common lie spoken by men. This is nothing but just a tactic to impress the other girl and make her love you.

Men usually throw this line when they don’t want to meet someone or attend an event. This is best in option when you cannot afford to show tantrums or be aggressive. Also, saying this line and turning up for an event is an excellent way to gain a wee amount of control.

9. “You are the most beautiful girl I have ever seen in my life”

Obviously, it isn’t true. Women are more cautious about their looks than men and every lady wants to be admired. Men usually use these words to impress a lady. Even though they might come across beautiful women every day, they will pretend and say that you are prettiest of them all.

A man says this to a woman just to avoid an embarrassing situation. It means that even you don’t know have any idea about who you are. Just to make a soft corner in the heart of a lady, a man says this. It also implies that you will still behave this way in future also and you partner should understand your behavior.