9 FACTS WORTH KNOWING ABOUT HUMAN ATTRACTION 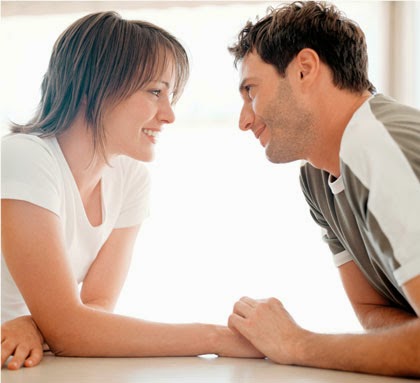 Look closely at your crush, spouse or significant other. Does he or she have symmetrical features? A strong jaw? Or even look a little like yourself? The psychology of human attraction is a fascinating field to study, and depends on all kinds of factors, including reproduction, positive association, and more. Keep reading to learn how and why we find certain people so good to look at.
1. Sometimes we exchange a like for a like.
Have you ever been told that so-and-so-who-you-barely-ever-noticed-before has a crush on you, then suddenly you felt a mutual liking for them? Well the attraction might be reciprocated based mostly on the fact that you feel complimented by their feelings, and automatically relate those pleasant, positive thoughts to so-and-so-who-you-barely-ever-noticed-before.


2. It’s best to have a face that’s symmetrical.
You probably aren’t conscious of comparing the two sides of a person’s face. But around the world, facial symmetry is considered a sign of beauty. Why is that? Symmetry signals good genes for reproductive health. Those with better symmetry will most likely produce offspring who are also stronger and more immune to gene manipulations or alterations.


3. Women with prominent eyes are attractive to men.
Women with shorter and more petite chins and foreheads means they have more estrogen (since estrogen limits bone growth in these areas). That shape makes the eyes look more prominent, a trait that men generally find attractive.


4. Men with a larger jaw and prominent brow are more attractive to women.
Men have the opposite face shape, usually. A stronger, more prominent jaw and brow equates more testosterone, and women find these characteristics attractive.


5. Smiling might not make you more attractive.
Men are attracted to women who smile, but it’s not true the other way around. Research found that smiling females were rated as more attractive, whereas men showing happy emotions were rated as less attractive. Displays of pride — indicated by a slight smile and raised fists — were perceived as most attractive in men.


6. Women like powerful, protective men
During menstruation, women are more attractive to men who would give them healthy, genetically blessed children, should they every mate. This means men who have dominant, powerful and protective characteristics, both physically and behaviorally.


7. The color of your shirt can make a difference.
In a University of Rochester study, men found women wearing red to be more attractive and desirable, compared to women in blue. The study suggests that red serves as a signal for se*ual excitation, since the effect also occurs in nonhuman primates.
And in another study, women perceived men clad in red as more powerful and more high-status — traits highly associated with male attractiveness.


9. Your voice can betray you.
Ever notice your voice change when you find someone extra sexy? A study conducted in the U.K. found that women spoke with a higher pitched voice when they found a man attractive.


Many studies have found that men prefer women with higher voices, associated with higher levels of estrogen — and women prefer men with lower voices, linked with more testosterone.