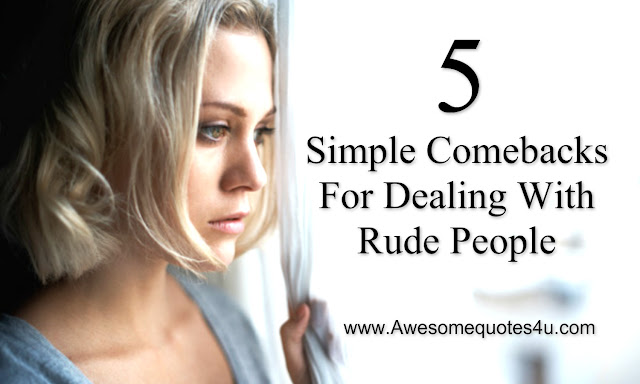 Rude people suck, but there's no way to get around it: you're going to run into one now and then. These are 5 great ways to deal with rude people.

1. Tell them you appreciate their perspective.

When someone is being rude to you, they don't expect graciousness, or any kind of positive emotions to come at them. If anything, it'll disarm them and make them realize you appreciate different viewpoints, including theirs.

Put on a smile and say "thank you." It's a subtle way to acknowledge their rudeness and opt out of engaging them on it. It shows you're in control of your emotions.

3. Tell them they're right.

Just because someone is rude doesn't make what they have to say incorrect. If someone rudely points something out, tell them they're right. It almost always gives them pause. They expect you to argue, not concede.

There's nothing wrong with saying a conversation with a rude person is over. You're in charge of who you talk to about what. If you're being disrespected, walk away.

Because what's funnier than laughing in the face of a rude person?