20 of the Wisest Quotes of All Time

Wisdom is something that comes from experience. Humans experience things differently from each other, they are always seeking wisdom no matter what the experience may be.

We use this wisdom to guide ourselves away from past mistakes and hopefully reach our endgame goals. Wisdom of all kinds has been passed down throughout every single generation of man. It is only acceptable that we give back the wisdom we have received to those who need it more than we do. 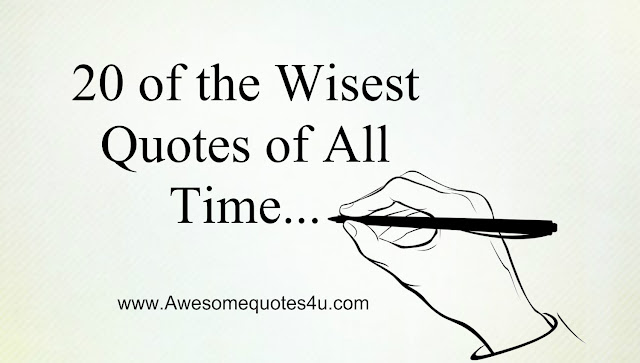 Here are some of the wisest quotes in the entire world!

1. "A person who never made a mistake never tried anything new." – Albert Einstein

2. "Our greatest glory is not in never failing, but in rising every time we fail." – Confucius

3. "You cannot be lonely if you like the person you're alone with." – Wayne Dyer

4. "Never be bullied into silence, never allow yourself to be made a victim. Accept no one's definition of your life, define yourself." – Robert Frost

5. "Your task is not to seek for love, but merely to seek and find all the barriers within yourself that you have built against it." – Rumi

7. "I have found the paradox, that if you love until it hurts, there can be no more hurt, only more love." –Mother Teresa

8. "Your vision will become clear only when you can look into your own heart. Who looks outside, dreams; who looks inside, awakens." – Carl Jung

9. "A man is but the product of his thoughts. What he thinks, he becomes." — Mahatma Gandhi

10. "An eye for an eye will only make the whole world blind." — Mahatma Gandhi

11. "What lies behind us and what lies before us are tiny matters compared to what lies within us." —Ralph Waldo Emerson

13. "Rock bottom became the solid foundation on which I rebuilt my life." – J.K. Rowling

14. "I can be changed by what happens to me. But I refuse to be reduced by it." – Maya Angelou

15. "You yourself, as much as anybody in the entire universe, deserve your love and affection" –Gautama Buddha

17. "Do not go where the path may lead, go instead where there is no path and leave a trail." – Ralph Waldo Emerson

18. "Life isn't about finding yourself. Life is about creating yourself." – George Bernard Shaw

20. "I am the wisest man alive, for I know one thing, and that is that I know nothing." – Socrates