How Do You Manage Your Anger, According To Your Zodiac Sign? 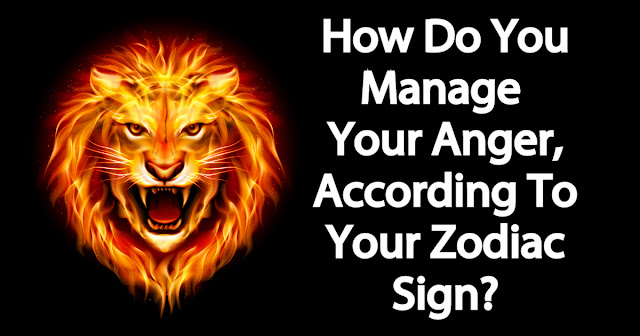 While all of us lose our temper at times, we can learn to deal with anger a bit better instead of allowing it to control our lives. In this reality, so many things can set us off, and each zodiac sign gets hot-headed about different issues.


Below, we’ll delve into the nitty gritty of what makes each zodiac sign angry, and how they can best deal with their anger. We hope you will take something valuable away from this article, and learn to manage any anger issues you might have in a healthier way.


HOW DO YOU MANAGE YOUR ANGER, ACCORDING TO YOUR ZODIAC SIGN?

As one of the three fire signs, Aries can definitely set you ablaze if you cross them. Sometimes, people feel as though they have to tiptoe in an Aries’ presence so as not to anger them, because you don’t want to deal with an Aries when they lose their temper. When an Aries gets mad, they tend to erupt just like a volcano, and anyone standing around them will get burned by their words. There is no middle ground with an Aries, as their emotions tend to get the best of them.

While Taurus doesn’t get mad easily, they do tend to hold grudges and give you the silent treatment if you hurt them. They usually keep their emotions to themselves, and can get passive aggressive if you rub them the wrong way. If you want to know if you’ve angered a Taurus, you’ll have to ask, because they won’t just admit that to you. They have a lot of pride in themselves, and don’t like it when people get under their skin so easily.

Geminis don’t generally have a bad temper, but if you get on their bad side, you’ll definitely know it. It takes a lot for them to muster up the energy for a confrontation, however, so you might get the silent treatment if you make a Gemini mad. You’ll probably have to make the first move if you want to made amends with a Gemini, because they have a tendency to avoid reconciliation and instead may just write you off.
CANCER

As a water sign, Cancers are extremely sensitive and caring, but this aspect of their personality gets them hurt easily. If you make them angry, they will just hide their feelings until they eventually blow up. Cancers are one of the most passive aggressive signs of them all, so if you cross them, you’ll have to chase after them just to get a response. They’ll go into recluse mode and hide inside their shell if you manage to penetrate their tough exterior.

Leos have a hot temper, just like any fire sign would. However, Leos get over the issue just as quickly as they got mad over it, mostly because they have the attention span of a child. They’re angry one minute about something you said, but then the next minute, they’re chasing after a pretty butterfly they saw behind you. Leos actually manage their anger quite well as a fire sign, because they don’t allow their tempers to get in the way of their zest for life.

Virgos don’t really anger easily, and have one of the calmest dispositions of all the signs. They have an analytical, logical approach to emotions, and as such, don’t really allow them to overtake their lives. However, since Virgos don’t express emotions well, they do tend to hide how they feel at times just so they don’t burden others with their feelings.

As the peacekeeper of the zodiac, Libras don’t really like to let their anger get the best of them. Actually, they’d rather just move on from whatever made them angry in the first place, but this can lead to bottling up their feelings and holding grudges. They have a habit of using your past mistakes against you, and can grow resentful if an issue is swept under the rug.

Scorpios can become hot-headed pretty easily, but they oftentimes won’t let you know it. Instead, they’ll plot revenge in their head, because they don’t like people toying with their emotions. Scorpios will retreat into their shell once angered, so you’ll have to let them cool off first before you try to make amends.

As the third fire sign in the zodiac, a Sagittarius will really let you have it if you make them mad. They don’t really know how to regulate their emotions, and believe in expressing them as much as possible. Sagittarians tend to explode when they get mad, and will bowl over anyone who stands in their way.

Capricorns, being an Earth sign, don’t tend to get mad very often. However, they also bottle up their feelings, and explode months later about every issue that they haven’t dealt with since. Capricorns secretly get frustrated about little things, but don’t like to express that as it makes them seem very child-like. When they do get mad, many people don’t know how to deal with their fiery temper.

Aquarians don’t mind debating, but they really hate arguing with a passion. If you get mad, they’ll likely just walk away. They don’t really like to allow their emotions to run wild, and present a composed, even-keeled disposition at all times. If someone makes them angry, they really will just avoid them rather than addressing the problem.

As a water sign, Pisces’ emotions run deep. So, their anger can get the best of them at times, but they won’t let you know that. Instead, they’ll deal with their emotions in the peace and quiet of their room, and will come talk to you when they’ve calmed down a bit. They do tend to hold grudges, but if you mean a lot to them, they’ll try their best to work things out.