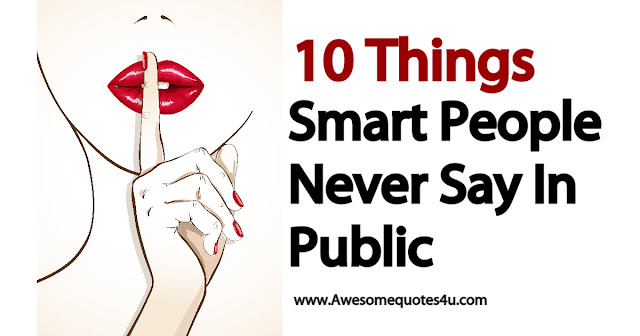 Here are 10 things that emotionally intelligent people refrain from saying:

Well, life isn’t fair – something most mature adults understand. Perhaps what happened is not fair; it may even be an egregious injustice. The thing to remember is that people surrounding us are often unaware of the “incident,” and even if they are privy to the scenario, proclaiming “It’s not fair” does absolutely nothing to solve the problem.
As difficult as it may be, focus your attention and efforts on resolving the issue. You’ll feel better about yourself, maintain your dignity, and may just solve the problem!

Here’s the thing: we have absolutely no idea what is going on behind the scenes of a person’s life. Saying “You look tired” – no matter how well-intentioned – signals to the person that their problems are on display for everyone to see.
Instead, phrase your statement or question in an empathetic fashion. For example, “Is everything okay?” suggests that you’re concerned about what’s going on.

Examples: “You look great for your age,” or “For a woman, you’ve accomplished so much.”
As we all (or should) know, age and gender biases still exist. The chances are that the person you’re speaking to is well aware of such biases, and are offended by the very mentioning of them.
No qualifiers needed. Just compliment the person.

Who hasn’t forgotten something said from time to time? This phrase implies that you’re insulted for having to repeat yourself, or that you’re somehow “better” in some way than the recipient.
To be fair, repeating the same thing over and over again to the same person is frustrating. Refrain from verbalizing this frustration, and attempt to clarify what you’re saying.
Do the decent thing and remind them from time to time.

The truth is that no one ever does or doesn’t do anything. Usually, these words are spoken disingenuously, dishonesty, or dramatically. Too often, they’re used to hurt someone else out of anger or contempt.
Substantiate what the other person did – and provide specifics. An example: “I’ve noticed that you continue to (such and such), is there anything I can do to help/something I should know?”

This one is going to be a source of discussion, and rightfully so.
Here’s our rationale: luck takes an outcome out of the person’s hands, and subjects it to outside influences or chance. Has anybody ever leveraged their aptitude to win the lottery? No. It’s luck.
Again, this phrase is subtle, often well-intended, and is certainly subjective to one’s own interpretation. But saying something along the lines of “I know you have what it takes,” or “You’ve got this in the bag” may bolster someone’s confidence to a higher degree than the notion of luck.

When someone seeks out your opinion, they do so expecting constructive feedback…any feedback. Saying “it doesn’t matter” – in a way – suggests that either (a) their situation is of no consequence to you, or (b) that taking the time necessary to provide feedback isn’t a priority.
Instead, be cognizant of the person’s situation. If pressed for time, suggest another where you can actively listen.

Stop. Are words about to come out of your mouth truly influenced by a measure of respect for the recipient? If you can honestly answer “yes,” then carry on. Just know this: how you frame your words; your body language, and your voice intonation will quickly make it apparent whether or not due respect was given.
On the other hand, if this is phrase spoken in “auto-pilot” mode, in an attempt to “ease into” a discussion that has nothing to do with “respect,” it’s best to pump the brakes.

This phrase is bursting with conceit and superiority. How many of you read this phrase and imagine two elementary-aged kids playing in some sandbox or playground? (Honestly, this writer did.) The reason is that the phrase “I told you so” is childish and immature. No intelligent, mature adult should utter such words from their lips.
You may have warned someone of consequences of a certain action. Maybe they had it coming, whatever “it” is. Maybe they’re even beyond the point of constructive criticism.
Find some way to interact with someone who’s made a bad decision that doesn’t involve contempt. Maybe they need some help that we can’t provide. Consider your options and act (and speak) intelligently.

RAISE YOUR HAND IF YOU’RE GUILTY OF SAYING THIS…
I GIVE UP
(RAISES BOTH HANDS.)

Joking aside, saying “I give up,” while seemingly harmless, it an affirmation that we’re incapable of overcoming something in front of us. Maybe it’s a terrible boss, a difficult assignment/project, a disdainful co-worker, or any countless number of things.But remember: you are much stronger/smarter/capable than you think. There is absolutely nothing that you cannot overcome. “I can do this” are the only words you need.