Ever Wondered Why Do Sports Athletes Wear That Colored Tape On Their Body? 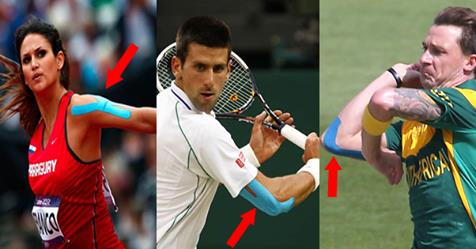 Have you ever wondered why the some athletes wear that colourful tape across their body? If you’ve been watching the sports, you’ve probably seen some athletes wearing weird tape (mostly blue) on various parts of their bodies. Many international sports stars including Novak Djokovic, Cristiano Ronaldo, Dale Steyn wear this tape.

Novak Djokovic has been wearing the tape during his Wimbledon matches.
The tape is known as the Kinesio (or just ‘k’) tape. It is an elastic sports and fitness tape designed for muscle, ligament and tendon pain relief and support. Athletes use the tape as a kind of elastic brace that helps to give rest to stressed muscles and relieve pain.

The start and end points of a stressed muscle are identified by a physiotherapist in the lab. Both ends are then tied together with the Kinesio tape which relives the stress on the muscles by limiting its movement further (by lifting the skin), even if the athlete goes through his/her daily training routines.

Designed to mimic human skin, with roughly the same thickness and elastic properties, the tape can be stretched 30–40% in the longitudinal direction. The cotton fibers allow for evaporation and quicker drying leading to longer wear time, up to 4 days.
The tape and technique were developed by Kenso Kase thirty years ago in Japan. The company website says that:
“[It] alleviates discomfort and facilitates lymphatic drainage by microscopically lifting the skin. [The Kinesio Tape can be] applied over muscles to reduce pain and inflammation, relax overused or tired muscles, and support muscles in movement on a 24-hour-a-day basis.”