Anger Always Harmful, Patience Is Must Required In Life 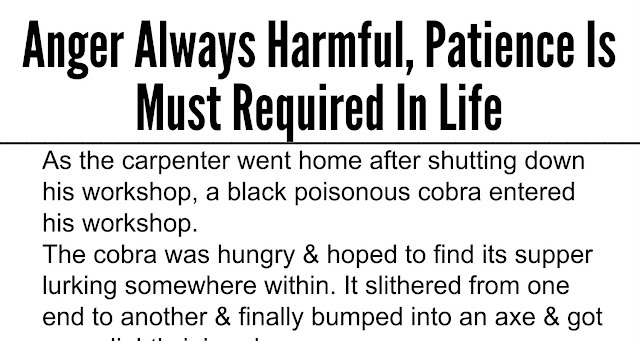 As the carpenter went home after shutting down his workshop, a black poisonous cobra entered his workshop.

The cobra was hungry & hoped to find its supper lurking somewhere within. It slithered from one end to another & finally bumped into an axe & got very slightly injured.

In anger & revenge, the snake bit the axe with full force. What could a bite do to a metallic axe? Instead the cobra ‘s mouth started bleeding.

Out of fury & arrogance, the cobra tried it’s best to strangle & kill the object that was causing it pain by wrapping itself around the axe.

The next day when the carpenter opened the workshop, he found a dead cobra wrapped around the axe blades. The cobra didn’t die because of someone else’s fault but faced these consequences merely because of it’s own anger & wrath.

Sometimes when angry, we try to cause harm to others but as the time passes by, we realise that we have caused more harm to ourselves.

It is not necessary that we show a reaction to everything. Step back & ask urself if the matter is really worth responding to .

People that show no inclination to change, are best handled with silence & prayers.

Dear GOD,
If I hurt someone, grant me the humility & courage to ask for forgiveness.