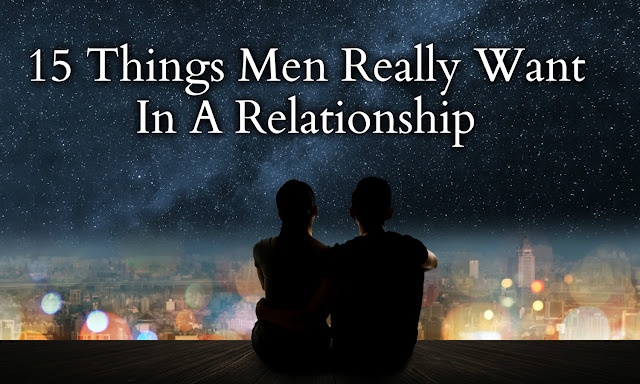 1. Most times women hold back on taking the lead in a relationship, whereas men prefer his woman to take a lead occasionally. Even if he is a born leader this does not mean that, he expects to and enjoys this position all the time.

2. Men enjoy receiving respect. The other side of this is that women must win respect for the man and the man must win the respect of the woman. Very few people enjoy being belittled, being the butt of a joke or being mocked at. No one is perfect, this both the man and woman needs to be respected for who they are and both appreciates this set of values.

3. People in general enjoy the admiration for whom and what they are and have accomplished. All a man wants is the admiration of his woman in all phases of his life.

4. Men enjoy his woman to be gentle with him. He does not enjoy the fact that because he is the man of the house he needs to keep a stiff upper lip. Cuddling, hugging, reassurance of the woman’s love for him goes a long way in a relationship.

6. Men want to be able to verbally communicate with their partner. Unexpressed communication builds walls in a relationship.

7. Men want women to use some common sense when around other people, knowing when and when not to talk.

8. Women need to know that her partner just enjoys being a man with other men.

9. If the man’s partner has, friends that he really cannot stand being around do not make him spend hours with that person or persons.

10. A man enjoys his partner showing interest in his activities. A man appreciates it when his partner sits down to enjoy what he is doing such as watching a football game.

11. Every couple goes through trying times. Women expect the man to be strong, but secretly the man hopes the same in his partner, to be strong and weather the storm with him. Men do not appreciate being a babysitter for a weak woman.

12. Never let on to the man that his mother is one of the worst human beings on earth. Men want their mother and partner to get along and be happy. Women need to do what they can to prune this relationship.

15. Some men seem to like the glitz and glitter of makeup and evening ware, sometimes, but way down deep most men like natural even better such as no makeup, and casual attire with a carefree attitude.

Personal experience as a leader for Interfaith Marriage Encounter sessions.