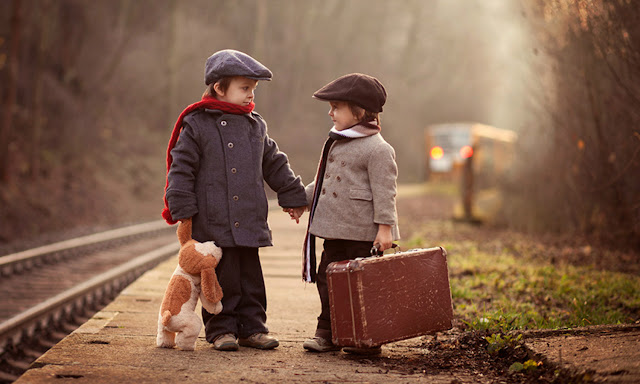 READ THE FOLLOWING STORY SLOWLY, IT'S A TOUCHING STORY

I have a brother who is 3 years younger than me. I wanted to buy a handkerchief, which all girls around me seemed to have. So, one day I stole 50 cents from my father's drawer. Father had discovered about the stolen money right away. He made me and my younger brother kneel against the wall as he held a bamboo stick in his hand. 'Who stole the money?' he asked. I was stunned, too afraid to talk. Neither of us admitted to the fault, so he said, 'Fine, if nobody wants to admit, you two should be beaten!' He lifted up the bamboo stick.

Suddenly, my younger brother gripped father's hand and said, Dad, I was the one who did it!' The long stick smacked my brother's back repeatedly. Father was so angry that he kept on whipping my brother until he lost his breath. After that, he sat down on our stone bed and scolded my brother, 'You have learned to steal from your own house now. What other embarrassing things will you are possibly doing in the future? You should be beaten to death, you shameless thief!' That night, my mother and I hugged my brother.

His body was full of wounds from the beating but he never shed a single tear. In the middle of the night, all of sudden, I cried out loudly. My brother covered my mouth with his little hand and said, Sis, now don't cry anymore. Everything has happened.' I still hate myself for not having enough courage to admit what I did. Years went by, but the incident still seemed like it just happened yesterday. I will never forget my brother's expression when he protected me. That year, my brother was 8 years old and I was 11 years old. When my brother was in his last year of secondary school, he was accepted in an upper secondary school in the central. At the same time, I was accepted into a university in the province. That night, father squatted in the yard, smoking, packet by packet.


I could hear him ask my mother, 'Both of our children, they have good results? Very good results?' Mother wiped off her tears and sighed,' What is the use? How can we possibly finance both of them?' At that time, my brother walked out, he stood in front of father and said, 'Dad, I don't want to continue my study anymore, I have read enough books.' Father swung his hand and slapped my brother on his face. 'Why do you have a spirit so damn weak? Even if it means I have to beg for money on the streets, I will send you two to school until you have both finished your studies!' And then, he started to knock on every house in the village to borrow money. I stuck out my hand as gently as I can to my brother's swollen face, and told him, 'A boy has to continue his study; if not; he will not be able to overcome this poverty we are experiencing. ' I, on the other hand, had decided not to further my study at the university.

Nobody knew that on the next day, before dawn, my brother left the house with a few pieces of worn-out clothes and a few dry beans. He sneaked to my side of the bed and left a note on my pillow; 'Sis, getting into a university is not easy. I will go find a job and I will send money to you.' I held the note while sitting on my bed, and cried until I lost my voice. That year, my brother was 17 years old; I was 20 years old. With the money father borrowed from the whole village, and the money my brother earned from carrying cement on his back at a construction site, finally, I managed to get to the third year of my study in the university. One day, while I was studying in my room, my roommate came in and told me, 'There's a villager waiting for you outside!' Why would there be a villager looking for me? I walked out, and I saw my brother from afar.

His whole body was covered with dirt, dust, cement and sand. I asked him, 'Why did you not tell my roommate that you are my brother?' He replied with a smile,' Look at my appearance. What will they think if they would know that I am your brother? Won't they laugh at you?' I felt so touched, and tears filled my eyes. I swept away dirt and dust from my brother's body. And told him with a lump in my throat, 'I don't care what people would say! You are my brother no matter what your appearance is?' From his pocket, he took out a butterfly hair clip. He put it on my hair and said, 'I saw all the girls in town are wearing it. So, I think you should also have one.' I could not hold back myself anymore. I pulled my brother into my arms and cried. That year, my brother was 20 years old; I was 23 years old. I noticed that the broken window was repaired the first time I brought my boyfriend home.

That year, my brother was 23 years old; I was 26 years old. After I got married, I lived in the city. Many times my h...usband invited my parents to come and live with us, but they didn't want. They said, once they left the village, they wouldn't know what to do. My brother agreed with them. He said, 'Sis, you just take care of your parents-in-law. I will take care of Mom and Dad here.' My husband became the director of his factory. We asked my brother to accept the offer of being the manager in the maintenance department. But my brother rejected the offer. He insisted on working as a repairman instead for a start. One day, my brother was on the top of a ladder repairing a cable, when he got electrocuted, and was sent to the hospital.

My husband and I visited him at the hospital. Looking at the plaster cast on his leg, I grumbled, 'Why did you reject the offer of being a manager? Managers won't do something dangerous like that. Now look at you - you are suffering a serious injury. Why didn't you just listen to us?' With a serious expression on his face, he defended his decision, 'Think of brother-in-law. He just became the director, and I being uneducated, and would become a manager, what kind of rumors would fly around?' My husband's eyes filled up with tears, and then I said, 'But you lack in education only because of me!' 'Why do you talk about the past?' he said and then he held my hand. That year, he was 26 years old and I was 29 years old.

My brother was 30 years old when he married a farmer girl from the village. During the wedding reception, the master of ceremonies asked him, 'Who is the one person you respect and love the most?' Without even taking a time to think, he answered,' My sister.' He continued by telling a story I could not even remember. 'When I was in primary school, the school was in a different village. Everyday, my sister and I would walk for 2 hours to school and back home. One day, I lost the other pair of my gloves. My sister gave me one of hers. She wore only one glove and she had to walk far. When we got home, her hands were trembling because of the cold weather that she could not even hold her chopsticks. From that day on, I swore that as long as I live, I would take care of my sister and will always be good to her.' Applause filled up the room. All guests turned their attention to me.

I found it hard to speak, 'In my whole life, the one I would like to thank most is my brother, 'And in this happy occasion, in front of the crowd, tears were rolling down my face again.

STORY MORAL: Love and care for the one you love every single day of your life. You may think what you did is just a small deed, but to that someone, it may means a lot.

IF YOU LIKE THIS STORY, USE ANY OF OUR SHARER TOOLS IN SHARING THE STORY