25 Secret Signs He’s Confessing His Love For You 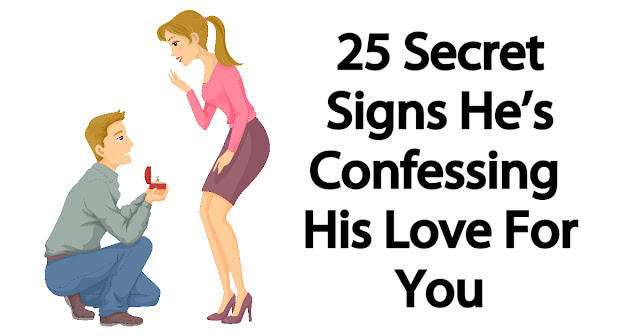 “Well, it seems to me that the best relationships – the ones that last – are frequently the ones that are rooted in friendship…one day you look at a person and you see something more…Like a switch has been flicked somewhere. And the person who was just a friend is…suddenly the only person you can ever imagine yourself with.” – Gillian Anderson

HERE ARE 25 SUCH SIGNS THAT A MAN IS CONFESSING HIS LOVE FOR YOU:
1. In a social setting, the man will most often give you more attention than anyone else in the room.

2. He restrains from acting annoyed, even if something that you do is a pet peeve or “pushes his buttons.”

3. He remembers meaningful days, such as your birthday or other dates of importance.

4. He doesn’t hesitate to make you his number one priority, even if it means going out of his way.

5. He defends you in the event someone attempts to bad talk or harm you in any imaginable way.

6. He always wants to spend time with you, and he loves every single second of it. He’ll seemingly always go out of his way to do so, if necessary.

7. He is always talking and opening up to you about nearly everything in his life – from his friends to his work.

8. He can’t stay mad at you for very long. He’ll often make the effort to apologize or accept your apology.

9. He tries hard to “fit in” with your friends and family members. He cares a lot about what they have to say.

10. He’ll sacrifice his happiness, comfort, and so on, if it means that you are better off.

11. He’ll text or call you before heading to bed. Often, you’re the person he speaks with last.

12. He is always respectful regardless of the situation. He won’t doe-eye other girls in your presence, or cut you off while you’re speaking.

13. He keeps you informed about his life and what’s going on; even if it’s a small matter.

14. He won’t be afraid to swallow his pride and apologize to you in the event he does something hurtful.

15. He’ll help whenever he’s asked, from the smallest favor to something that demands his full attention and effort.

16. He eagerly wants to know about your life, from your childhood to work – and everything in between.

17. He’s protective of you in many ways. For example, does he request a call or text to know you got home safely? Does he “guide” you across the street or while walking?

18. He’ll include the word “we” instead of “Me” or “I” when discussing something that includes you. He often does this by choice, as he wants to include you in many things as possible.

19. He’ll hold you or stand close when you’re in the presence of other men. It’s his way of “claiming” you, and subtly suggesting that other men should be aware of this.

20. He cherishes your opinions, even if they may starkly differ from his own. When making choices that involve you both, he’ll want to know what you think.

21. He holds your hand or touches your back when walking around in public. This is a subtle display of his protective and reassuring nature.

22. He has big dreams and always seems to include you in them. Maybe he mentions moving in together, buying a home, or having a child.

23. He quickly accommodates your needs, from the smallest thing – like needing a few more minutes to get ready, to the bigger things – such as taking time off work to take care of you when sick.

24. He’s courteous and gentlemanly in just about everything he does with you.

25. He remembers your conversations, especially the things that you’ve said, even it took place a long time ago.