Here’s How To Read FEMALE BODY LANGUAGE Like A Champ. 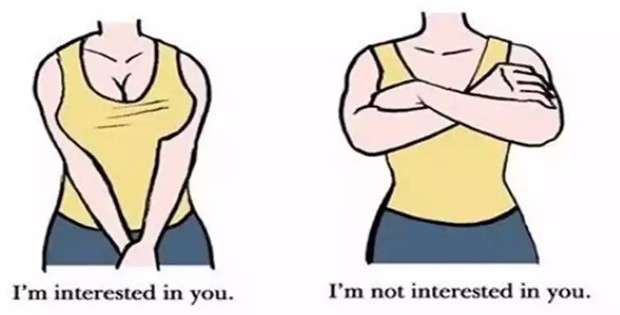 Women can be hard to read and, at times, may even seem too complicated to understand. However, the problem might not be that women aren’t communicating with you, but that you just aren’t looking for communication in the right places. Even when a woman isn’t saying anything, she may still be using her face and body to tell you everything. More so than men, woman naturally use body language to communicate. Since women are sending you messages with their body language all the time, why not jump in, roll up your sleeves and learn to understand them.

Noticing how close a woman is (or isn’t) to you is a simple way to determine whether or not she feels positively toward you. If she stands less than arm’s length from you, she is probably comfortable around you, and she may even be trying to get you to notice her. Also, if a woman leans in while talking with you, then she is engaged in what you are saying and is probably trying to flirt with you. Similarly, if a woman sits with her legs close to yours or with them pointing at you, she may be interested in getting to know you on a more personal level.
Furthermore, if a woman seems to be finding excuses to touch you (often on the shoulder, arm, or leg), then she is sending the signal that she likes being around you and that she wants to be close to you. On the other hand, if a woman positions herself far from you, or if she stands or sits with her body angled away from yours, then she is probably not particularly interested. Also, if grazing or touching a woman causes her to tense up, that may be her body’s way of letting you know that she is uncomfortable.

If you catch a woman looking your way from across the room, then she is probably trying to get your attention. If she makes repeated eye contact with you, or if she seems to maintain eye contact for longer than normal, then she is paying close attention to you which is one of the body’s ways of communicating interest and flirtatious desire.
However, if a woman seems to be avoiding your gaze, or if her eyes seem unfocused and bored while you are talking to her, she probably isn’t enjoying your conversation as much as you might like.

Smiling is an obvious, but important way that women communicate positive feelings for someone. If a woman smiles or giggles a lot when she is around you, then you can rest assured knowing that she enjoys your presence. Moreover, if a woman draws attention to her lips by licking or biting them, then she may be trying to tell you that she’s aroused or would like to get to know you further. However, if a woman is reluctant to laugh or if her lips seems pursed or tense, then she may be anxious, unhappy, or eager to leave.

Playfully twisting hair, fidgeting hands, and fiddling with jewelry are all potential signs that a woman likes you. Women often get a little nervous when talking to someone they like which can cause them to move their hands more than normal. Additionally, if a woman often touches her own neck, chest, shoulders, or lips, then her body may be saying that she enjoys your presence and is interested in you. On the other hand, if a woman’s hand or arm movements seem strangely jerky or rushed, or if she runs her entire hand through her hair in an exasperated manner, then she may be trying to tell you that she’d rather be alone.

While there is no surefire way to tell if someone is lying just by looking at them, there are several body language signals you can look for if you are worried that a woman might be trying to deceive you.
It is difficult to remain relaxed while lying, and it’s normal for people to move around while talking when they are comfortable. So, if a woman seems unusually tense or is abnormally still, then she may be trying to hide something from you. Also, if a woman frequently moves her hands toward her mouth or covers her mouth while she speaks, then she might be lying. Lying may also cause a woman to speak at a lower volume, or to speak in an unclear manner. When people are being dishonest, they are often ashamed of being found out, so it is natural for their bodies to respond in ways that obscure their words.


In A Nut Shell
Body language is, for the most part, a remarkably honest system of communication. While women are often rather self-conscious of what they say when dating or meeting someone for the first time, the messages they send through body language are often much more open and direct. Becoming a practiced reader of female body language is a great way to gain confidence while flirting and interacting with women. When you know what a woman wants, it’s much easier to act appropriately. Reading female body language can also help you avoid unpleasant rejection by helping you quickly realize when a woman isn’t really interested in you.