12 Ways To Detect If Someone Is Lying To You 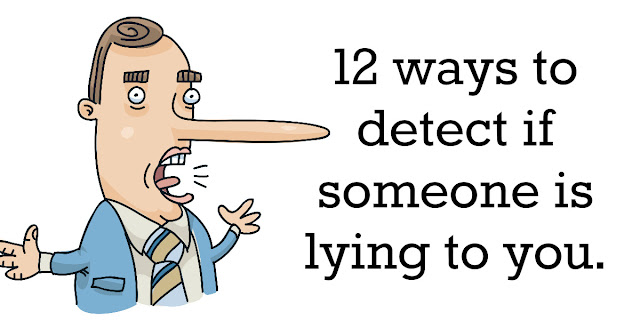 Too much or too little eye contact can indicate dishonesty. It is natural for humans to break eye contact during a conversation, but too much of it or total lack of it can indicate that the person is lying. Liars will often times over compensate by delivering the lie with full eye contact.

We’ve all seen cartoons where characters swallow or gulp audibly in the face of trouble. Well, humans do the same thing when they lie. People who are lying often try to lubricate their throats by swallowing or clearing their throats to prevent tension from building up.

A person lying will often times nod or shake his or her head in opposition to what is being said. Another tell is when the person hesitates momentarily before nodding or shaking his or her head.

People who lie often touch their noses when they are dishonest. These abnormal physical indications tend to give them away.

Sometimes, the smallest hint or change in a person’s expression gives him or her away. These are usually described as a flash of an expression that occurs in a split-second. Often times a person telling a lie will feel distress, and in that moment his or her eyebrow will furrow upwards, causing lines in the forehead.

People tend to breathe faster when they lie, so look out for short, rapid breaths when a person is speaking. This may be an indication of dishonesty if they haven’t run a marathon right before!

Often times, a person lying will not notice that he or she keeps repeating the same phrases or facts. Sometimes the lie is a concoction that he or she believes to be extremely convincing, and will try to emphasize over and over again.

Whether it’s faster or slower, higher or lower, a person’s voice often will give away that he or she is telling a lie. Pay attention to these subtle cues: Is the person talking at a faster pace than he or she normally does?

A common tell is the exaggeration of details. A person may follow up a lie with an even more outlandish detail, obviously conjured based not on knowledge but out of desperation to appear authentic. An example would be, “My sister lives in Hong Kong. Have you been to Kowloon? It’s so nice and incredibly clean there. No large buildings in sight.” These details tend to go over-the-top and are used to over compensate for the lies.

The placement of the hands often indicate a level of truthfulness or trustworthiness in a person. Whether the person is actively scratching his nose, touching his lips, or clenching his fists — these are all possible signs he is telling a lie.

When a person is engaged in a conversation and tells the truth, he or she tends to lean in towards the other person. However, those telling a lie have a tendency to lean or move away from the other person.