If You Don’t Want Your Kids To Be ill Mannered, You Have To Stop Making These 5 Errors

Something that happens to almost every parent are children having temper tantrums and misbehaving, without them even recognizing the issue. Luckily, for you, here, we’re going to present you 5 errors that every parent makes and should stop making them right now! 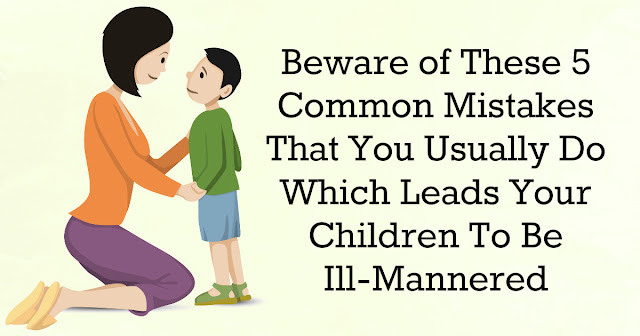 If you don’t react to these little behaviors and actions in time, you will bring about certain repercussions in your children’s lives.
That was also confirmed by Mrs. Emma Jenner, a very famous woman known for her show on TLC “Take Home Nanny”. There, she revealed 5 errors parents make that sooner or later would suffer the consequences.
According to Emma, it is vital that parents start demanding more from their children or to expect more from them and involve them in their endeavors and difficulties. To give them less, in order to force them to get themselves going. To challenge them.

#1 You’re afraid of your children

Example: If a child wants to drink milk from a different cup, and not their usual one, parents immediately start looking for another cup instead of ignoring the request. They fear that their child will cry or refuse to eat.
Emma considers this to be a huge mistake. Your child shouldn’t command you. You have to let them cry if they want to and go someplace else if you don’t want to hear it, but never raise your children indulging every single one of their wishes along the way. You must think about what message you´re sending them when you give them all they want just because they are crying. Are you going to do something about it?

#2 Making excuses (“That´s how children are”)

One of the 5 errors is this one. If you justify their misbehavior and outbursts in public by using this phrase, you’re motivating your children to continue misbehaving and be irresponsible.
Children are actually capable of doing much more than their parents can expect. This goes for respect, manners, everyday domestic work, generosity and self-control.
Emma claims that you should raise the expectations you have for your children, that way you’ll teach them how to behave properly.

#3 You don’ let others scold them

Back in the day, teachers and professors could scold our children when they behaved improperly.
They were our eyes and ears when the children were out of our sight. Nowadays this is almost impossible, because if a teacher or an employee gives a piece of their mind to a child, parents tend to get mad. They don´t even try to find out what happened to cause this kind of a reaction from a superior. If you act like this, you’re basically telling your children to misbehave and that neither you, nor the teacher, or the employee would do anything to stop them.

#4 Children come in the first place

One of the 5 errors is this one, too. Parents tend to look after their children too much. It’s good for the evolution, but we should also create a timetable adaptable to children’s needs, such as food, clothes, nursing and others.
Parents nowadays are taking it to another level, subjecting their own obligations and mental health to children, to satisfying all their needs and requests. You can’t give them everything they want, when they want. You can’t also burst out running for everything they ask for. This will take your peace and your health away, it will stress you out, but above all, it will show your children they are the ones that are in control.
Nothing will happen to your child just because you’ve taken some time for yourself (unless there’s an emergency of some kind), neither will anything happen if you say “No.”

#5 They use to take advantage of the shortcuts

Parents today often resort to a series of shortcuts to avoid their children getting bored and thus start misbehaving. They only burden them with electronic devices whenever they´re waiting for a doctor’s appointment, boarding a plane, waiting for a bus, or just cooking and cleaning at their homes. You have to teach your children how to be patient, when they should learn how to amuse themselves on their own. They should also learn that food won’t be ready and served whenever they want it to be. Above all, you should teach your children they need to help in the kitchen, but not with actual cooking, but with doing the dishes.
This will help them become stronger. Try not to make these 5 errors and be a better parent for your children!