BIRTH ORDER AND PERSONALITY: ARE YOU TRUE TO TYPE?

Do the birth order personality types ring true for you and the people you know?
Are you a typical firstborn or middle or youngest child? I’ve been pretty fascinated by the topic of birth order personalities, ever since I wrote a blog post claiming middle kids are more interesting than their siblings. (I’m obviously biased, being the super-middle middle child in my own family.) 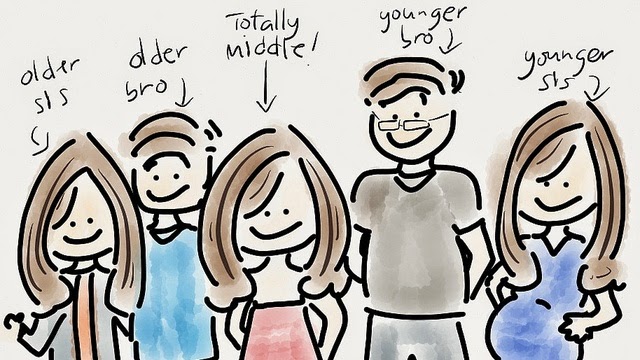 The thing is, there really do seem to be some very fixed stereotypes when it comes to birth order. As I mentioned on my blog, this is the reason that when eldest kids are bossy, we’re all “Gosh, you’re such an eldest kid.” Or, when youngest kids are acting helpless or irresponsible, we say “OMG you’re such abunso!” Only kids are easy too — when only kids don’t share or play nice, we think “Hmmm, only kid. I get it.” 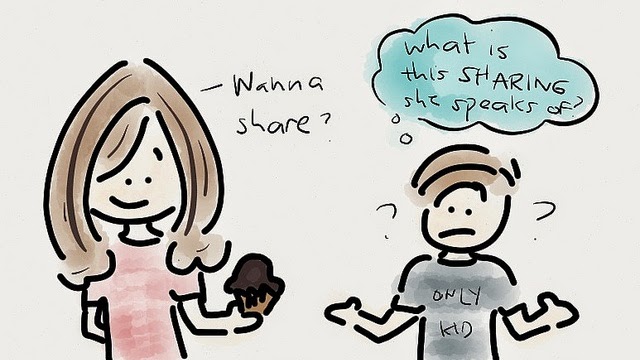 The theory that birth order affects personality has been around for centuries. It was first proposed by psychiatrist Alfred Adler (1870-1937), and while it has been contested by other experts over the years, I still tend to think that there’s some truth to it.
Here are the basic birth order personality types, according to Kevin Leman, PhD, author of The Birth Order Book: Why You Are the Way You Are. Are they true for you?
The firstborn child 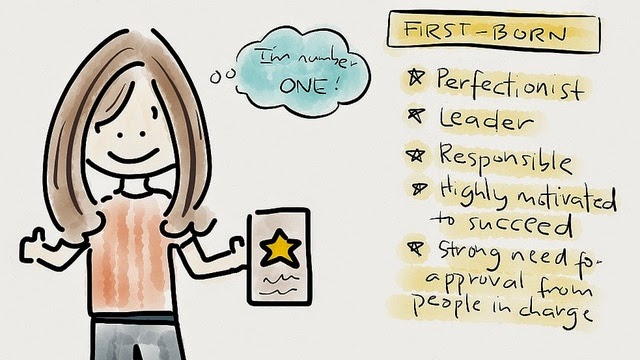 Firstborns are natural leaders. Taking the lead from their parents, they like taking charge and want everything to be just right. This may also mean they struggle to admit when they are wrong.
Typically reliable and conscientious, firstborns are often perfectionists who don’t like surprises. Although firstborns are usually aggressive and confident, many are also people pleasers with a strong need for approval from anyone in charge.
The only child 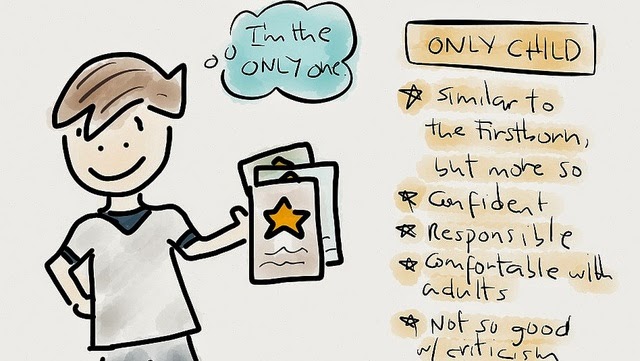 According to Leman, only children are “Super Firstborns” or “firstborns in triplicate.” They share many of the same traits as firstborns and frequently shoulder parents’ high expectations. Thus, they tend to be even more responsible and even bigger perfectionists. They also tend to struggle more with criticism.
Only children are often confident, well spoken and tend to do well at school. They are also likely to use their imagination more than other children, and usually get along better with people older than themselves.
Middle-born children 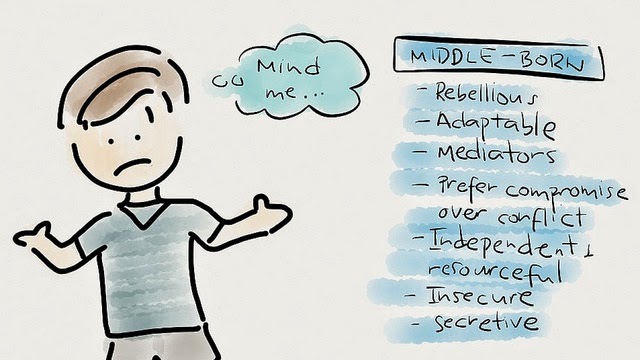 Middle-born kids are the most difficult to pin down, because while they are guaranteed to be opposite of their older sibling, that difference can manifest in many ways. Middle kids will usually develop skills and interests different from those shared by the family, and prioritize friends and peer groups since they often feel they do not have a special place within the family.
Middle children often feel that they receive the least attention, which can make them insecure and secretive; however, it also makes them more independent, inventive and resourceful. They can usually read people well, and often act as mediators or peacemakers since their “middle” role allows them to see all sides of a situation.
The last-born child 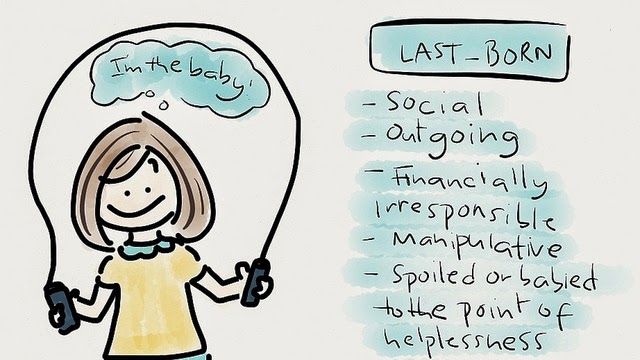 The last born or “baby” of the family usually benefits most from the fact that by the time they come around, parents are more comfortable and experienced when it comes to the art of parenting.
Lastborns “shoulder less responsibility, so they tend to be more carefree, easygoing, fun-loving, affectionate and sociable, and they like to make people laugh,” says Leman.
He adds, however, that while lastborns may be charming, they have the potential to be manipulative, spoiled or babied to the point of helplessness. They are also the most financially irresponsible and can turn rebellious, with an “I’ll show them!” attitude, as they tend to view their elder siblings as faster, stronger, bigger and smarter.
Do the birth order personality types ring true for you and the people you know? If they don’t, there are several reasons for that. Factors like family size and circumstances, gender, age gaps between siblings, divorce, adoption, a death or illness, and so on can all affect the way birth order personality traits develop.
University of Georgia psychologist Alan E. Stewart also recently distinguished between “actual” birth order, or ABO (the numerical rank order into which you are born in your family of origin) and “psychological” birth order, or PBO (self-perceived position in the family).
“Your actual birth order need not have the same impact on you as the birth order you believe you have. Actual and psychological birth order can deviate for a number of reasons, including illness of one child, size of family, and degree of separation between siblings. Your role in the family based on your age may not be same as the role you have come to occupy.” – Psychology Today 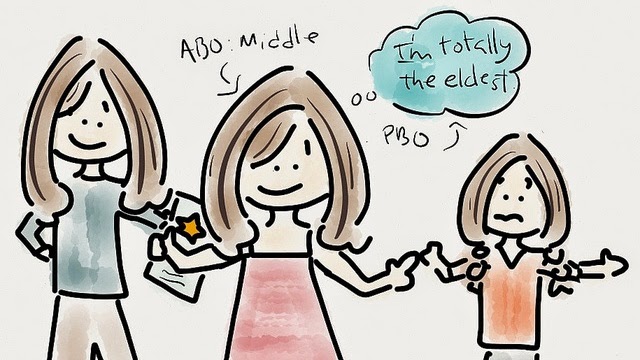 This is true in my case. I’m the middle child, but because my older siblings both left the country when I was a teenager, I effectively became the eldest child — and so I actually exhibit more firstborn than middle-born characteristics.
Whatever the case — whether you’re true to your birth order personality type or not – it’s always good to remember that any personality type theory really only serves as a tool for greater self-awareness. And any tendencies we may have are simply that – TENDENCIES. If they’re good ones, then by all means nurture them and allow them to blossom.
If they’re bad, well…that’s the beauty of being free and intelligent human beings. We always have the choice and ability to overcome that which makes us less than great. – Rappler.com