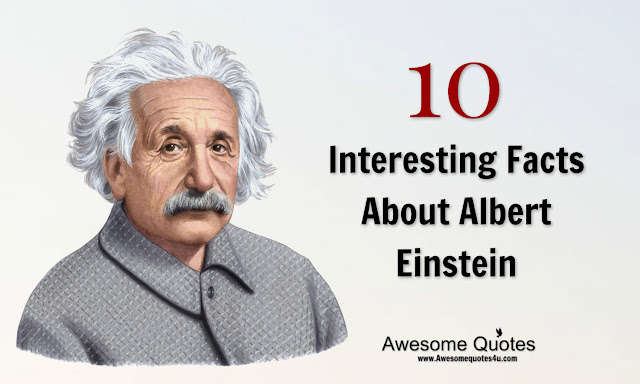 Albert Einstein, the kid with abnormally large head who was unable to talk until he was four, later became world’s most remarkable Physicist. Later he won a Nobel Prize for his work and also named as Man of the Century by Time magazine but amazingly he was not that good at studies. His results were always poor and he once failed his university entrance exam. He was short of memory and mostly used to forget his tasks.

This post is dedicated to Albert Einstein and we’ll try to list 10 cool and interesting facts about him.


1) As he didn’t talk until he was four, his parents were worried about him. But once while they were on the supper table, he broke his four year silence and said “”The soup is too hot.”

2) He never loved hair cuts and wearing socks while sailing and violin were his passions. He named his violin Lina.

3) After Einstein’s death, his brain was removed from his head without bringing in his family’s knowledge. This immoral act was done by Dr. Thomas Harvey who wanted to conduct a search on his brain. He was later permitted by Einstein’s son Hans Einstein.

4) He had a very bad memory and he could not remember dates and phone numbers, in fact he even didn’t knew what his own phone number was.

5) Once his mathematics professor called him a lazy dog because he could not find Einstein’s interest in studies.

6) He was inspired by a compass which was gifted to him by his father while he was sick at age of 5. It was the start of his interest in science.

7) In 1952, he was offered the presidency of Israel but he politely refused the offer.

8) Almost all of his work is remarkable, but he got unimaginable fame when his paper on mass-energy equivalence was published.

9) He used to charge people for his autographed and donate all this money to charity.

10) In 1951, while leaving a party with his friends, he was rushed by a photographer who asked him to smile for a photograph. But Einstein who was already tired, just stuck his tongue out instead of a smile. The photographer luckily captured this memorable moment.